We went to the Alligator Farm this weekend for their trick or treating event.  This is Hook excited.  Well, as excited as Hook gets….

You were apparently so excited you needed a nap on the way.

When we got there, you were not amused by the line or the kid behind you in the Ninja Turtle outfit with some sort of sword.  Not sure what he was doing with a sword, but you made it a point to turn around often to show him your hook and remind him of who you were.  He didn’t seem impressed but then again I couldn’t really tell behind the Leonardo (Yes I know all of their names and colors….don’t ask) ninja turtle mask.  You were also not amused with the person there to take pictures with dressed up as Spiderman (he was pretty much a middle aged man with a beer belly…admittedly creepy) nor the man dressed up as an Alligator named Gumbo (also creepy).  You literally said, “No, no pictures.”

Once we got in, you were really interested in looking at the animals and a lot less interested in waiting in line for the treats.  Except for when there were animals involved.  Captain Hook loves a turtle!

Then we happened upon the Crocodile exhibit.  When you handed over your hook, I started referring to this part of the night as a build up to the reenactment of the “incident”. Oh you know, that incident where Peter Pan cut off Hook’s hand and fed it to the crocodile….. Anyways, you spent a lot of time looking at the crocodiles.

This is you inspecting your foe…. 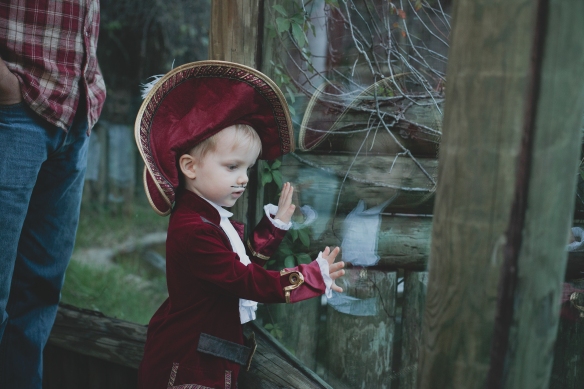 You were NOT amused with me taking pictures……AT ALL!

And then you stabbed me…. 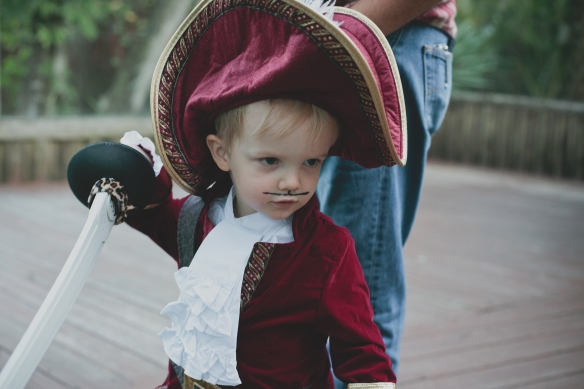 JUST KIDDING!!!  But I did heed your warning and stopped taking pictures.  Needless to say, it was a great night!